Footprints on the Trail of Life 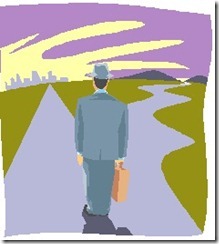 When traveling through uncharted territory, it is well worth pausing at cross-roads where the trail splits in two different directions to consider carefully which route is more likely to lead to the desired destination.

It is a well-worn spot, for every human being must face such a task. In the book, Claiming Christ, our family study has begun the trek through dozens of specific scriptural passages to consider what God himself records about legitimate claims of Christianity. Our first two verses from the book of Deuteronomy established guideposts along our path.

Several times in Scripture, God specifically records that he has intentionally set paths before us: one path that leads toward life and blessings and the other that ends in cursings and death. All our choices, major ones and incidental ones, are footprints in one direction or the other. There are no in between way-stations. Regarding those who try to walk the line, Jesus says that God will vomit such lukewarm hypocrites into oblivion.

The paths are set before us by God, and the wisdom to discern between the options comes from him, but the choice is ours to make. Pagan or believer, agnostic, atheist, or Christian, the paths are the same. We are told that broad is the way that leads to destruction, but we are not told that such a direction will even look like an identifiable path. As I reach the midway point of time on this earth, I reflect on the likelihood of such a popular choice looking more like a combination of familiar footprints of those we admire along with the appealing foliage of off-trail uniqueness. In other words, the attractive path will fit what we desire, it will look good and appeal to what we want from life.

The narrow path will have far fewer footprints. Such choices in life will often be lonely, fraught with difficulty and even ridicule. They will reflect more of the expectations recorded in an old Book than of what we naturally prefer. And yet, those who consistently chose to venture in such a direction know better. They understand that the path of life is not successfully navigated by physical sight or by the popularity of the mob.

True Christians will travel by an eternal compass that registers according to the promises of God rather than the magnetism of this earth. They will harken back to the ancient boundaries of Scripture for wisdom at every cross-road of life. They will demonstrate the honed skills of a mountain survivalist, well familiar with the nuances of choice.

Christians who prove to be “in Him” will show their hearts desires as regular followers of the Way. Those immersed in the pattern of Christ will also care deeply about the aimless wanderings of those around them and seek to encourage choices that veer in the direction of eternity. Since Jesus is the Way, the Truth, and the Life, then faithful followers on his path will become guideposts along the Way, professors of his Truth, and conveyers of Eternal Life.

May that be you! Make the choice. Travel His Way.

What do the footprints around you reveal about the path on which you travel?

2 Responses to Footprints on the Trail of Life